Dignitana is a medical technology company based in Lund, Sweden and publicly-traded on Nasdaq First North. The company produces the patented DigniCap® Scalp Cooling System to counteract chemotherapy-related hair loss and contribute to improved patient well-being and quality of life. The system provides continuous cooling with high efficacy, safety and acceptable patient comfort. DigniCap was the first scalp cooling system to receive FDA clearance and is the only system with an expanded indication to reduce the likelihood of chemotherapy-induced alopecia in cancer patients with solid tumors. In the pivotal trial it was concluded that The DigniCap Scalp Cooling System prevented hair loss in 66.3% of patients with breast cancer receiving adjuvant chemotherapy compared to the control group where all experienced significant hair loss. Dignitana has offices in Lund, Sweden, and operations are based in Dallas, Texas.
Significant events during the year

Significant events after the end of the year

Our priorities in 2018 are to first complete the transfer of operations to the U.S., which is already proceeding ahead of schedule and under budget. This transition is critical to our success moving forward as a unified, effective, and profitable company. 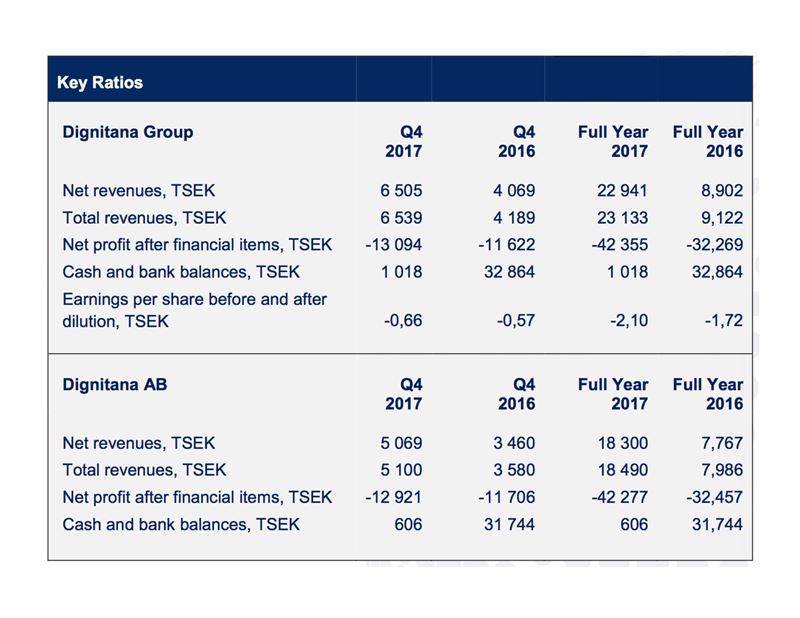 2017 was a pivotal year in reaffirming Dignitana’s leadership role in the scalp cooling market. Building on growing momentum and demand, revenue in the U.S. has now grown for eight consecutive quarters. Year over year saw a 378% revenue increase in the US and our unique pay-per-treatment model.   The FDA expanded our clinical indications to include solid tumor cancers which significantly increases the potential scalp cooling market. We enhanced cap fit and ease of use with the DigniTherm Click Cap that was developed in partnership with Boa Technology. We continued to secure placement in prestigious medical facilities and partner with multi-site health care providers and we implemented a program to increase per unit effectiveness and utilization of machines. In the global space we continued to place units through existing relationships and initiated an evaluation of our distributor relationships.

After significant assessment across all divisions of the company, in Q4 Dignitana’s Board of Directors took the bold step of moving the majority of Dignitana’s administrative operations to the U.S.   This move will help the company to operate more effectively and efficiently as our decision making and development efforts are combined with our sales and marketing functions. In short, we have now accurately repositioned the company for future growth and optimization of resources.

We have accelerated our product development efforts and are on target to produce a new system in 2018. The DigniTherm Click Cap roll out is near completion and has received a positive response from both health care providers and patients. The Click Cap improves ease of use and enhances cap fit to optimize patient outcomes. For 2018, Dignitana will continue to focus not only new site installations but also on maximizing machine utilization rates with existing site partners

Our marketing efforts continue to target both the clinical and consumer audiences to increase awareness of scalp cooling and our product through frequent messaging via multiple messaging channels. Launching a new product in the healthcare space takes time, as does adoption of a new product in a facility. Our consultative and service-oriented approach is working well as we build a solid foundation with our health care providers.

Based on current revenue trends, the company is forecasting to become cash flow positive by the end of calendar 2018.

The pay-per-treatment business model in the U.S. is growing steadily. The model is attractive for Dignitana AB, both partner sites and patients as it enables very low startup costs for the sites and patients pay for only the treatments that they use.

In August 2017 Dignitana signed a contract with Dignity Health which allows any of the 19 cancer centers in the Dignity Health network to offer the DigniCap system to their patients. The first Dignity location implemented the system in Q3 2017 and a second location will be installed in Q1 2018.

In conjunction with adding new locations, in 2018 the sales and clinical teams will continue to collaborate to increase utilization of existing locations, as the per-treatment model provides significant revenue opportunity through optimizing the usage of machines that are already installed.

International sales efforts are now being handled from the U.S. and are currently under detailed analysis to evaluate financial models and market potential. We have existing relationships with distribution partners in Europe, United Kingdom, Mexico, Australia, South America, and the Middle East, and in conjunction with Konica Minolta we are evaluating the PMDA approval process to provide DigniCap to the Japanese market.

As a result of Dignitana’s collaboration with Boa Technology to improve ease of use and enhance cap fit for optimal patient outcomes, The DigniTherm Click Cap was launched in December 2017 and the new cap has been very well-received. Staff training is brief, patient usage is intuitive, and clinical results have been excellent. The Click Cap roll-out to all U.S. facilities will be completed in Q1 2018 and the Click Cap is now the standard that is sent out to all new installations. Options for adoption of the Click Cap outside the U.S. are currently being evaluated.

Redesign of the existing C3 device continues. We are on target to bring the next generation cooling device to market in 2018.

In the U.S., universal insurance coverage for scalp cooling is not yet available. With insurance reimbursement for scalp cooling, this treatment option would be available to a much wider patient population. Because there is not a unique CPT treatment code for scalp cooling, many providers will not approve claims for the treatment. Some patients are successfully using generic codes for reimbursement, but this is sporadic based on provider, plan, location and other factors. Universal insurance coverage will not occur until there is a recognized CPT code with an attached cost valuation.

The July 2017 FDA expansion of DigniCap clinical indications to include not only women with breast cancer, but also men and women with solid tumor cancers is a significant milestone for the company. The potential scalp cooling market in the U.S. thereby increased from 255,000 new breast cancer cases to more than 800,000 men and women diagnosed with solid tumors each year. We can now offer scalp cooling to three times the number of patients we could treat under our initial clearance. DigniCap is the only scalp cooling system to have clearance for patients with solid tumors in the U.S., and men are starting to discover that this technology is now an option as they undergo chemotherapy.

As we continue to expand the availability of DigniCap, we recognize the importance of establishing an ongoing partnership with clinicians. In Q3 2017 we launched the Scalp Cooling Integration Program to provide comprehensive and ongoing training and support to clinical partners, so they can easily and efficiently integrate scalp cooling into their daily work flow. The program has been very well-received in our facilities and has already proven to be very effective in optimizing the clinical utilization of DigniCap. Dignitana’s focus on personal service and support is a critical differentiator in the scalp cooling field, and a driving force in our expansion.

In addition to Dignitana’s pivotal study for FDA clearance that was published in the 14 February 2017 issue of Journal of American Medical Association (JAMA), research featuring DigniCap was published in three other clinical journals: Clinical Breast Cancer, Breast Cancer Research and Treatment, and Clinical Journal of Oncology Nursing. Additionally, abstracts on studies using DigniCap were presented at the 2017 SABCS conference.

In terms of clinical trials, the five-year follow up of the DigniCap pivotal trial is ongoing at the five medical centers in the initial trial. This collection of long-term data is critical to wider clinical acceptance of scalp cooling. In Q1 2017 data from19 clinical trials was submitted to the FDA, and the expanded FDA clearance was granted in July 2017 based on their evaluation of this large collection of clinical evidence.

The majority of Quality Affairs has been transferred from Sweden to the U.S. and we have hired a VP Quality Affairs in Dallas to provide leadership to this critical function moving forward.

In Q3 2017 Dignitana announced production delays due to changes at a subcontractor’s operations which caused a decline in sales in the second half of 2017 and these issues were resolved in Q4 2017. With the transition of operations to the U.S., all production facilities and vendor relationships have been evaluated, and changes will be made as needed to optimize production costs, efficiency, and deliverability.

Dignitana’s targeted marketing efforts continued to build public awareness, with a dual strategy of informing both prospective patients and health care providers about scalp cooling and DigniCap availability through print, advertising, media outreach, digital content and events. We plan to build on this solid foundation in 2018 and focus on creating targeted digital content to our varied audiences.

Media interest in DigniCap remains high and in 2017 we achieved 968 media placements resulting in 1,402,639,331 media impressions across print, online and broadcast channels. These numbers were fueled by achievements such as the FDA expansion of clinical indications announcement in July, coverage of DigniCap’s clinical trial in Journal of the American Medical Association (JAMA), and connecting reporters with compelling patient stories in local markets.

National media saturation included coverage in prestigious outlets such as The New York Times, CBS Evening News, CNN, and the Washington Post, Mashable, Marie Claire and U.S. News and World Report. With the addition of new DigniCap sites across the country, we strengthened community relations and local outreach, working directly with physicians and patients in to identify positive, educational stories for traditional and social media. Targeted local media outreach resulted in highly effective local outlets such as The Baltimore Sun, Jacksonville.com, and Spanish-language media in Miami.

Social media has been a strong patient marketing channel, with consistent growth and interaction on Facebook, Instagram, and Twitter. Several patient stories were featured in DigniCap’s first social media campaign for Breast Cancer Awareness Month, #BetterWithYou, and targeted campaigns in local markets have been very successful.

Dignitana has made several key hires to provide the experience and resources needed for effective and efficient operations. A VP Finance and a VP Quality Affairs were hired in February. After restructuring the sales division to include global responsibilities based in the U.S., we are adding at least one additional salesperson to ensure we are reaching all possible partner sites.

With the transition of operations to the U.S., we are particularly aware of the need to maintain close ties to the First North community and our investor base in Sweden. With this in mind, Dignitana has introduced a program to increase transparency to the market with more frequent communication through a monthly newsletter, direct response to shareholder emails, additional information posted on the company website, and online presentations with company leadership to be scheduled throughout the year.

As noted previously, please note that moving forward all company communications and reports will be issued primarily in English, with the exception of the Årsredovisning och koncernredovisning för räkenskapsåret that is published in April or other documents required to be published in Swedish.

The Board of Directors propose that no dividend will be paid for 2017.

Dignitana is in an intensive product launch phase in several markets, which may cause sales to differ from one quarter to the next. Future capitalization may become necessary to build the organization for successful penetration of selected markets.

Company staff in Dignitana AB totaled 9 people as of 31 December 2017.

Policies for preparation of the financial report

Submission of the year end report

Dignitana AB (publ) - Board of Directors

Dignitana is a Swedish public company based in Lund and manufacturer of the medical cooling device DigniCap®. Dignitana AB is listed on Nasdaq First North Stockholm and has appointed Erik Penser Bank as Certified Adviser. Headquartered in Dallas Texas, Dignitana, Inc. is the U.S. subsidiary of Dignitana AB. For more information visit www.dignitana.se and www.dignicap.com

This site uses functional cookies and external scripts to improve your experience.

NOTE: These settings will only apply to the browser and device you are currently using.

This site uses functional cookies and external scripts to improve your experience.